Myth #2: EV's aren't good for emergencies or for evacuations

Another myth the anti-EV crowd pushes is that they aren’t good for emergencies and evacuations. Once again, that’s simply not true. Let's look at a few common situations you may be faced with as an EV owner:

While you’d have a harder time charging an EV during power outages, that’s not a situation unique to EVs. Go to any gas station, and you’ll see that most of their equipment also runs on electricity. The card payment systems, the cash register inside, and even the pumps that bring the gas up from the underground storage tanks all cease to function when the power’s out. Unless a power outage is days long, the advantage of the gas vehicles is simply a lie. Neither type of vehicle can fuel up.

For longer-term outages, both types of car will deplete their fuel. However, people with solar panels on their homes still might be able to charge an EV. Making gasoline at home, on the other hand, is simply not possible for anybody.

Because of the size of an EV battery, some people have even gotten creative and used the electricity stored in their car to power their home. While this kind of DIY is not common, it does highlight the ability of an EV to be adapted to these situations and serve the needs of their owners. 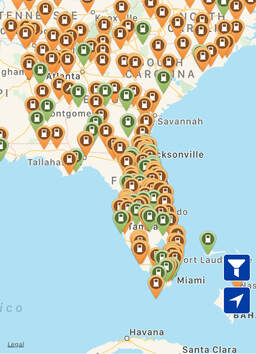 The worst case scenario for evacuations that people like to raise is the hurricane. Once again, this one gives no real advantage to the gas vehicle against most EVs. In fact, the EV may even come out ahead on this one.

The most blatant lies told are that it would take days to escape the hurricane zone. That may be true for some EVs without rapid charging, but is not true for most BEVs. For plugin-hybrids, the argument is a complete moot point because they also use gasoline. Worried about if there are enough fast charging stations? Look at the map of Florida from Plugshare showing charging stations (DCFC are in orange)... there are plenty of stations for an EV to get out.

While power outages are a problem during and after hurricanes, there aren’t electricity shortages before the storm. Gas cars, however, often have problems finding fuel BEFORE the storm. In some cases, fuel trucks even get police escorts to hurry the distribution of fuel. Electricity, on the other hand, is generally available right up until the storm hits, and often through the storm in some areas.

In evacuation traffic jams, EVs generally outshine gas cars. When sitting still in traffic, EVs don’t sit and burn fuel. The horror stories of people being stuck in traffic for 12 hours and running out of gas simply aren’t a problem for EVs and hybrids. Even for long stays in traffic, EVs can run for a long time by shutting off non-essentials like air conditioning.

Preparing for Emergencies Is Easier

If you want to prepare a vehicle for long-term power outages, an EV is a better choice. Not only can you find ways to charge it with solar, but with any other source of electricity, including generators. Sure, you can stockpile gasoline for a car, but that would eventually run out.

There’s also the advantage of being able to use the EV to power other things in a pinch. With V2H technology or with a power inverter, an EV could run nearly anything requiring electricity for hours or days. Some can even power their whole houses from an EV’s battery. Should you be in an area without power, but with power available in the next town, you can even drive the EV out to bring electricity home.

If anything, an EV can prove to be an asset in emergencies and not a liability
Have a question you'd like to ask us? Just click the button below to send us an email:
Email Us
Copyright 2022, EV Resource, LLC